This exercise was split into two parts.

The first asked us to think about how we would like to present our 5th assignment in an installation or exhibition. Although we are not expected to do this at level 2, it allows us to think about how our work can be “strengthened or expanded by their physical location”. In order to do this, we were asked to create a rough sketch to show scale, position and anything else we think could be incorporated. 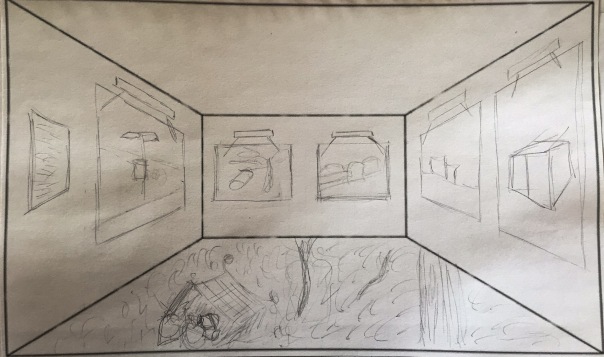 As this is only an exercise, I thought about the more extreme ways I would imagine my work to be displayed. In the above image, you can see that the images have been displayed quite large and I have even put an image on the floor. The reasoning for this is because my self-directed project is about drawing attention to the edgelands and making people more aware of them. In a small space with large images, the viewer is “forced” to take notice of the images and feel emerged in the edgelands. I would have lighting above each image or order to give them each their own individual light, attention and focus.

In the second part, we had to read John Walker’s essay “Context as a Determinant of Photographic Meaning” and note the key points.